The Women’s Leadership Blueprint serves as a bridge between the competencies expected of leaders and the behaviors expected of women. Women can lead, but they have to build their leadership styles differently than men. The blueprint is based on the vast experiences of successful women executives and provides a foundation upon which 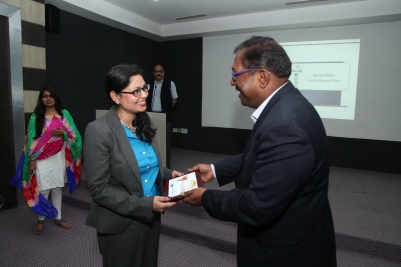 others can build. It is composed of nine key competencies that women must demonstrate differently than men to “break through cats.”

Self-assurance is a hallmark of leadership, but stereotypes of women set expectations that they should be seeking the validation of others. Successful women leaders have found that they can exude confidence and competitiveness when they frame those two characteristics differently. Rather than using confidence to emphasize and defend their position of authority, they use it to underscore confidence in their teams, show their willingness to rise to the occasion, or share and distribute power to others.

When women are confident in a strategy, they frame it in terms of “we” instead of “I.” Men can afford to be more confrontational and state, “This is the way it’s going to be.” Women strive for a more egalitarian approach that says, “This is what I believe needs to happen, and here’s what I am willing to do about it.” Collaborative leadership is not only a more natural style for many women, it is also increasingly believed to be a superior style of leading modern organizations and driving innovation. Women must be confident in the tones they set for their companies, but be willing to give authority and credit to others.

Girls are conditioned from a young age not to brag about their achievements. Men are more comfortable candidly taking credit for something. Women are not only less comfortable taking singular credit, but are penalized for doing so. This makes demonstrating ambition even more difficult for women to do than displaying confidence. However, passion and drive are required to get to the top of an organization and be effective. Women must gain visibility and prove themselves in order to rise higher in a company.

Women can show their achievement drives without looking threatening by rallying others behind their passions. Some executive women find that when they take on a major challenge, success requires bringing many people together. Rather than viewing a project as a personal achievement, they make it something inspiring and engaging to others. Women can also make their achievement drives less threatening via self-challenge. In this way, the drive is not about being the best, but about doing better than the last time.

Influence is an area in which women demonstrate greater strength than their male counterparts, so it is particularly important to women leaders’ success. One of the reasons women are more effective at influencing is because they naturally show more empathy toward others. Fortunately, displaying this type of emotional intelligence aligns with people’s expectations of women; it is therefore a competency that is easier for women to exhibit than confidence and achievement drive.

Persuasion at its most basic level is a three-step process. A person needs to:

*Understand the goals/values/motivations of the person she is trying to persuade.

*Find a personal connection to the other’s goals/values/motivations.

By establishing a shared vision or connection, women can influence people in positions above them. Finding a shared agenda or goal helps women present themselves as collaborators instead of as people who are pushy or trying to steal the limelight. While men may persuade others in one-on-one conversations over a meal or casual interaction, women are more adept at using emotional connections during a presentation or critical meeting. They are more likely to modify a presentation or approach to suit the audience and connect to a shared set of values or interests.

Inspiring commitment concerns how leaders engage the people around them, facilitate people’s sense of ownership about their work, and foster people’s sense of belonging in an organization. By focusing on interpersonal relationships, inclusiveness, and democratic leadership, women inspire greater commitment from others because these behaviors are positively associated with women in general.

Male leaders tend to focus on building community through question-and-answer forums, sharing the company vision, and drawing on metaphors to establish group cohesion. Female leaders tend to look for more than just dedication and cooperation from others. They are more likely to involve others in problem solving and seek emotional bonds that go beyond employees simply trusting their executives’ expertise. Women set up a two-way dynamic that invites involvement, whereas men set up a one-way dynamic that asks others to form an allegiance to them and/or the company. Two-way engagement has repeatedly been shown to positively influence employee dedication, innovation, and ultimately a company’s bottom line.

The final form of executive influencing is strategic control, or a leader’s ability to direct initiatives while simultaneously delegating implementation to others. This can be a major challenge for both men and women because, as executives, they are expected to cede some control over the very efforts that have enabled them to reach positions of leadership. Women face the additional struggle of delegating work without appearing bossy. Male leaders who exercise their authority and explicitly take complete control over a project’s implementation may be able to do so without questions or consequences, but women must use more subtle ways of maintaining control.

Female leaders are most effective at strategic control when they articulate their visions in such a way that managers and direct reports will make decisions that align with those visions. It is also important to maintain a collaborative and empowering spirit with others. When people feel that they are partnering with a woman leader to achieve goals instead of being given orders, they do not view her as being controlling. For instance, one female executive established a structure whereby a male manager would attend negotiations and always report the highlights of the meetings to her by a given time each day. She could make suggestions and course corrections during the negotiations, but she was able to do so in a way that felt collaborative instead of controlling.

Conceptual thinking is a leader’s ability to make connections between disparate concepts and information, to think creatively, and to see the big picture. From a purely biological standpoint, women leaders have an edge over their male counterparts in this area. Research shows that women have a greater capacity for “web thinking” because there are more neural connections between the two hemispheres of their brains. Practically speaking, this means that female decision making is informed by a greater amount and variety of data. While this tends to be more time-consuming than male decision making, it enables female leaders to see parallels and alternatives that can lead to surprising and innovative solutions. It also tends to mean that their solutions are more sustainable in the long term.

Successful women executives use this ability to their advantage but are careful not to boast about it. They offer their solutions or ideas as “helpful offerings” to others. Women must be careful not to present their thinking with an air of superiority or intimidation.

Women’s natural abilities in conceptual thinking also aid their cultural savvy. They are able to pick up on patterns, cultural cues, and nuances that together give them a better understanding of their work environments. This broad understanding includes things such as how people interact, who interacts with whom, when people speak and when they do not, and how people dress. Girls develop greater cultural savvy from an early age not only because of how their brains are wired, but because their socialization requires that they adapt to their surroundings to a greater extent than boys must. Women leaders are therefore more adept at altering their communication styles to their audiences, being aware of how changes in one department will affect another, reading subtle and nonverbal cues, and mapping specific actions they will need to take to reach a goal in a given cultural context.

In contrast, male executives value political savvy more than cultural savvy. While the two are similar, political savvy is more about the power dynamics in play among individuals in an organization. Men tend to value power and status within a hierarchy and are politically savvy in a way that either protects or enhances their degree of authority. In contrast, female political savvy relates more to how women work in groups and with individuals.

The double standard that permits men in leadership to be assertive but labels the same behavior in women “bitchy” is not fair or right. However, women executives find it better to succeed and make others comfortable with their demeanors than to insist on mimicking men. They remain confident without being aggressive and “soften the edges” through a variety of styles that suit their brands.

For some women, humor–particularly self-deprecating humor–is an easy way to put the audience at ease. The goal is to be authentic and remove any hint of superiority or pretentiousness.

A second strategy is to practice showing empathy. This means not being afraid of the role of emotions in the workplace and acknowledging the feelings of others. When women executives genuinely strive to help and encourage people on their teams while demanding excellence and accountability, they move “beyond bitch.” Female leaders report that they receive more respect when they are empathetic than they do when they attempt to demonstrate their power or status.

Finally, women can look for ways to build or acknowledge areas of common interest. For one executive, an interest in local sports enabled her to connect better with colleagues. Another focused on using a different joke each meeting to quickly connect the group. Ultimately, the goal in finding areas of common interest is to create a springboard for trusting relationships that benefit everyone.

Men typically reach the top of organizations faster and more directly than do women. This is often because men are “pulled up” by other senior men, whereas women must forge their own paths. Women who aspire to be leaders must be vigilant and proactive about their self-development and establish strategies for reaching the executive level.

Many of today’s successful female executives reached the top because they actively looked for jobs in their companies that would be stepping-stones to leadership. Rather than focus on the frustrations of taking a less direct route to the top, these women used a greater breadth of experiences to their advantage once they reached a position of leadership.

Women must be wary of jobs that can derail their career aspirations. Jobs in staff departments, such as human resources, communications, and legal, tend to be dead ends on a path to leadership unless they are explicitly negotiated upfront as being otherwise. Line jobs with operations responsibilities are viewed as vital to progress toward leadership.

Most importantly, women must actively look for people in the company who will advocate for them. While male leaders rarely like to admit it, most people in the upper echelons of a company had people sponsoring them on their way. Successful female leaders actively seek out mentors and sponsors to enable their progression. They look for people who allow them to access important networks, who give them greater visibility, and who will advocate for their promotion.

USING THE BLUEPRINT TO DEVELOP LEADERS

While the Women’s Leadership Blueprint is particularly important for women, the collaborative leadership style it emphasizes is an asset to both men and women. Men do not need to “break through bitch,” but they should recognize that organizations are changing to be flatter, more dependent on innovation, and more focused on employee engagement. Male leaders can benefit from developing competencies such as empathy, self-awareness, inclusiveness, and conceptual thinking.